In Conversation with Brennan & Partners 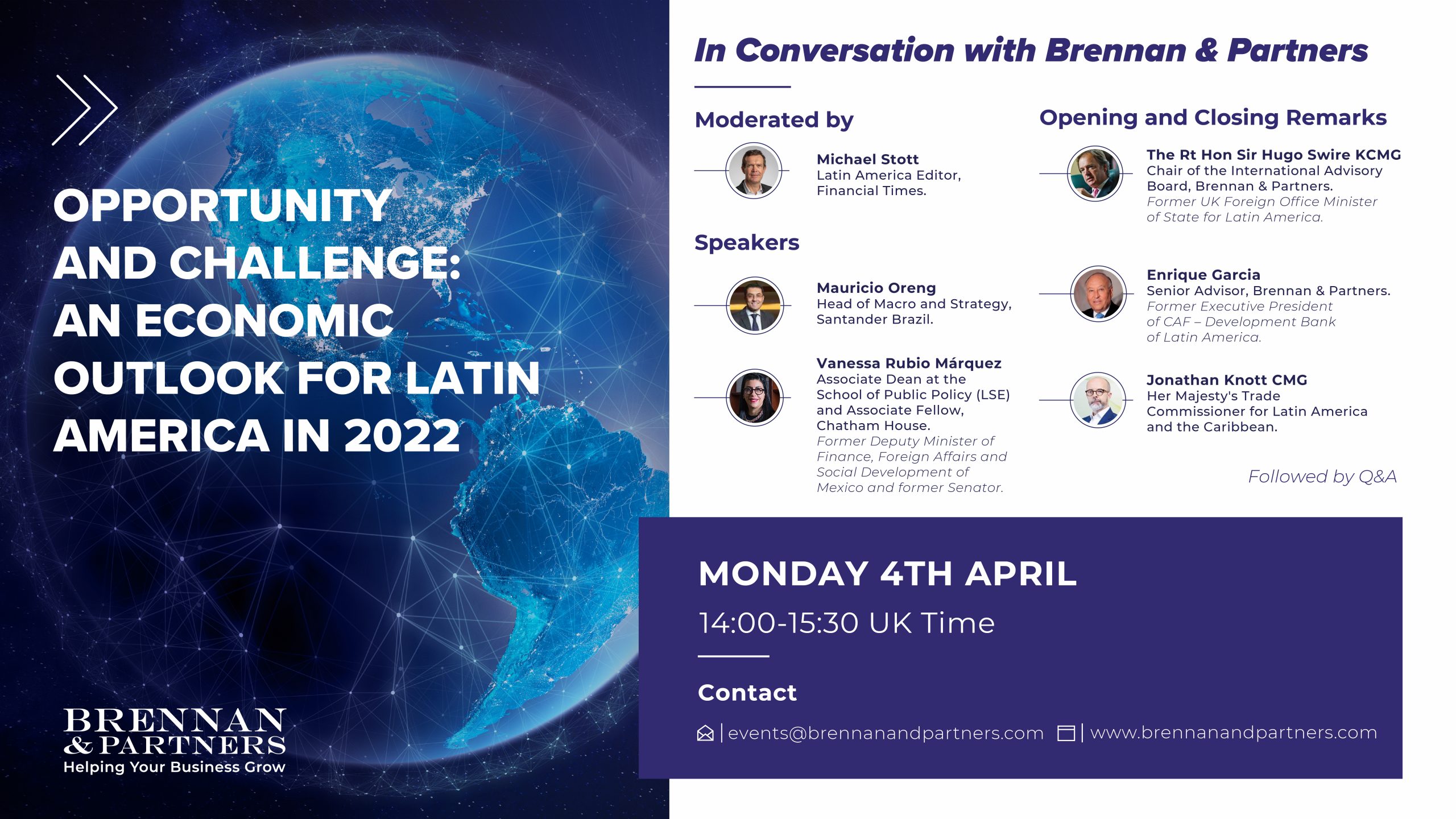 A quiet optimism characterised ‘Opportunity and challenge: An economic outlook for Latin America in 2022’, the fifth ‘In Conversation With’ event hosted by Brennan & Partners on 4 April 2022. Despite the challenges associated with middle income status countries, the impact of the Covid-19 pandemic, and the external shocks of US-China tensions and Russia’s invasion of Ukraine, it was widely asserted that Latin America’s ‘hidden strengths’ would set the region in good stead over the coming decade.  Widespread democratic processes, a vibrant private sector led by a tech boom and a new ‘electric economy’ have begun to catch the attention of investors in the United Kingdom, Europe and beyond.

The discussion convened 63 participants from across Europe and Latin America as an expert panel of guests discussed the region’s political, economic, and growth outlook.

Key themes to emerge from the discussion include:

>> Hidden strengths – While unlikely to make news headlines, the region’s hidden strengths were becoming increasingly evident, placing Latin America in a favourable position when compared to geopolitical hotspots elsewhere. Democratic stability has withstood the impact of Covid-19, and where political change has occurred, it has largely observed democratic process. Oil and commodity exports have presented a renewed opportunity to secure growth and invest in infrastructure for the future. Inflation remains a problem, yet central banks have for the most part responded promptly by raising interest rates ahead of their counterparts elsewhere. Many currencies are stable, debt positions are generally far better than previous crises in the 1980s, and international markets are calmer as a result.

>> New headwinds add to existing challenges – Many consider the region to be entering a ‘new era’ against a backdrop of global shocks including the ongoing US-China tensions, Ukraine-Russia war and the effects of the Covid-19 pandemic. This has affected productivity, and job creation remains high on government agendas. The impact of Russia’s invasion of Ukraine will certainly be felt in Latin America as commodity prices soar. For most countries, the extent of this impact will depend largely on two factors – access to oil, and access to food. Rising food and oil prices will likely drive inflation higher, although there will be opportunities for top wheat producing countries such as Argentina. In addition, much of the region is caught in the so-called ‘middle-income trap’ characterised by low investment, slow growth and limited industrial diversification. When considering how the region’s largest economy Brazil can exit a period of low growth, reforms – especially fiscal and pension – must be addressed before addressing other growth opportunities such as the tech industry.

>> Political stability and the future of integration – Despite growing investor confidence in political stability, uncertainties due to ongoing electoral cycles – rather than election results – remain a point of concern, and companies interested in doing business in the region must look beyond news headlines. A lack of regional integration in recent years was largely attributed to ideological differences between countries, although recent elections have demonstrated a left-leaning, progressive trend that could see a resurrection of regionalist approaches to boost business and trade. Newly-elected leaders are starting to recognise the importance of pragmatism over dogmatism when considering their international appeal. Foreign direct investment remains the biggest single contributor to filling the region’s investment gap, and although the Pacific Alliance shows considerable potential, it is still in its initial stages and susceptible to the impacts of changing political ideology. In Mexico, for example, recent domestic policies and a lagging fiscal response to the Covid-19 pandemic (at 0.7% of GDP) have made international investors wary, despite a projected 3.4% GDP growth in 2023. Its systemically relevant geopolitical and geo-economic position as the region’s second-largest market, however, mean the opportunities outweigh the risks.

>> Institutional robustness is key – Investor confidence can be heavily linked to an adherence to government checks and balances and the rule of law, a crucial element when seeking to attract both technical and financial support. Governments must ensure credibility is restored when lacking and maintained when achieved. Free Trade Agreements are seen as a limiting factor on democratic undermining, and the UK’s successful rolling over of all EU trade agreements represents an excellent opportunity for the UK Government to modernise its trade relations with the region, while offering short term solutions to overcoming market access barriers. Private sector advocacy plays an important role here, and the UK can share its expertise in developing regulatory environments, especially in rapid growth areas such as Fintech. One thing remains clear – the region must continue to work to strengthen trade relations to mitigate the impacts of external shocks.

>> Tech boom and green growth lead mega trends – Investment into the tech sector has quadrupled in recent years, and governments have responded favourably to this trend. Tax reforms in Brazil have made investment opportunities in the sector much more attractive, and Mexico’s Fintech law has seen a sharp rise in the number of fintechs operating there, now totalling 512. Foreign companies can help bridge technical gaps, and areas related to financial education and other ‘techs’ including edtech and agritech are firmly on government agendas. While the need to address adaptation and resilience for climate change remains a priority, this will depend largely on political will. There is an ‘enormous appetite’ across the region to boost energy transition both at a state and metropolitan level.

>> Temporary commodity gains and environmental pledge set-backs – The strong gains seen in Latin American stocks since the beginning of the year have been largely attributed to commodity and energy prices. This can, however, become a double-edged sword. While countries have sought to reduce their dependence on fossil fuels and accelerate their transition to clean energy sources, a near-term shortfall of crude could see Latin American exporters among the largest beneficiaries globally. This means at best a temporary halt on climate change commitments to reduce production. Responsible standards have therefore become more important than ever. Yet these gains are likely to be only temporary. With so many of the region’s countries dependant on commodity cycles, panellists expressed the hope that past lessons would be applied, and that governments would make the most of the current window of opportunity to help build a more sustainable future.

>> Opportunities for UK business in productive transformation – The UK should be more active in becoming a provider of tech, innovation, and other new fields by looking beyond traditional sectors related to raw materials. Nearshoring is becoming increasingly important for overseas firms, and smartshoring means all parties benefit from stable environments far from geopolitical hotspots while overcoming supply chain disruptions. With the UK representing only 1.2% of the region’s imports, this is a market that is currently under-exploited by UK business. Yet these businesses wish to understand market specifics and are frequently unaware of the opportunities available. Key to this understanding where the UK offering can match Latin American demand. Priority areas include recovery-related infrastructural spending, healthcare and life sciences, and renewable energy. Food and drink, retail sectors and digital sales platforms are all indicators of middle class growth, and opportunities suit SMEs as well as larger corporates.