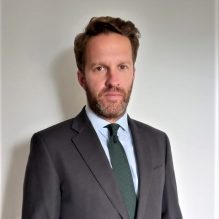 Edward is Associate Director, Global at Brennan & Partners. He has focused on corporate and government relations across multiple sectors for over twenty years, specialising in stakeholder engagement, strategic communications, and commercial partnerships.

For a decade as director of government relations and strategic communications at policy and investment think tank OMFIF, he was responsible for forging linkages with central banks and ministries of finance across central and eastern Europe, Latin America-Caribbean, southeast Asia, and sub-Saharan Africa, together with their private sector counterparts.

He completed a five-year tenure as board director and conducted investment missions with bank, asset management and hedge fund clients to over 30 countries. Prior to this, he was responsible for public and private sector relations, and political and economic intelligence at Canning House, the UK centre for Latin American affairs. He has been a Trustee and Chairman of the Anglo Central American Society and Anglo Ecuadorian Society, building on past experience as a university lecturer in Peru and Mexico, representing the British Council.

As a Latin America specialist, he set up The Latin Americanist in 2020 to channel his work with the region. Edward has a master’s degree in translation, and speaks English, Spanish and French.