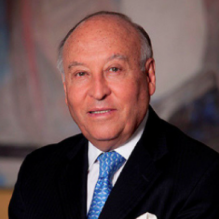 A Senior Advisor at Brennan & Partners. Luis Enrique García Rodriguez was Executive President of CAF – Development Bank of Latin America, a regional multilateral financial institution, for 25 years between December 1991 and March 2017. Before his election as President of CAF he was the Minister of Planning and Coordination and Chief of the Economic and Social Cabinet of Bolivia (1989-1991) and Undersecretary of Planning and member of the Board of the Central Bank.

At the international level, he also held professional and executive positions for 17 years at the Inter-American Development Bank (1966 – 1973 and 1979 – 1989), where he concluded his career as Treasurer of the institution, before joining the Bolivian cabinet in 1989.

He is currently President of the Council of International Relations for Latin America (RIAL), Co-Chair of the Ibero-American Productivity and Competitiveness Council (CIPYC) and Chairman of the Board of Directors of the Trust for the Americas, Visitor Chairman of Grupo Financiero Bisa in Bolivia. He is also a member of the following boards and / or advisory boards: Inter-American Dialogue, Wilson Center, Institute of the Americas, Emerging Markets Forum, Carter Center, Eminent Advisory Group of the President of FIDA, Patronato Fundación Euroamérica, Canning House in London, Harvard, Notre Dame, and Georgetown Universities in the US, London School of Economics (LSE), Bolivian Private University (UPB), Emerging Markets Institute in Beijing and San Ignacio de Loyola University in Peru.